A Park as a Site

The four sites are essentially public spaces, actual or potential parks, waiting to be appropriated and turned into vibrant places for performance and public engagement. However, all four are very different in their context and character: Ketki’s site is a large redundant square between a multiplex and few office buildings in New Delhi’s Vikaspuri, Mugdha’s is a popular but unattended park in Ahedabad’s university area, Charvi’s is part of a vast manicured terrace garden and Prachi’s site is a park aggregating the backyards of a housing society in Delhi’s Rohini.

Ketki’s site – part of a market area in Vikaspuri, which she visits or passes by every other day – is full of drama. The commercial complex, at least half a century old, is representative of the indifferent Indian urban place, which offers large swaths of parking but no parks. Although predating the development explosion following liberalisation and sparing us the unsound sparkle of glass facades, the place is in disarray as there appears to be no strategy for inhabitation – just an incidental collection of parking lots, plazas and service streets created by big building blocks.

I can imagine the proud moment when the architect would have completed the drawings of this commercial complex: large masses with some cuboidal surface manipulation, arched openings in the facade (of course, decorative arches and not real ones) and streets leading to the central space, delineated with colonnades and other connected plazas. The streets however are service areas and have become backstreets, while the hierarchy of the plazas is only incidental. Besides people crawling across open spaces to get to and from their parked vehicles, the only animation in the market is due to the Multiplex at the Southern end, which forms the corresponding face of the square and also separates it from the main road. Several small vendors of food and children’s amusement rides occupy the eastern threshold to the square, slightly off the plaza of the multiplex (which lies to the south-east of the square). Neither are they enough in number, nor do they have enough in themselves to draw crowds into the square. The shop fronts on the edge of the multiplex face the main road on the south.

The square has several intriguing objects of use and disuse: planters, benches, plinths, drinking water & decorative fountains, which – if accommodated into the design without prejudice and engaged with – can perhaps help create a rather playful environment. Daniel Lebiskind’s Outside Line in Uozu, Japan and Bernard Tschumi’s Parc de La Villette in Paris come to mind, with their architectural follies. I am also reminded of my kids playing with Lego and an assortment of other toys – diverse, disparate, and disproportionate objects brought to life to create stories.

With a potent mix of indifference, fear, chaos and intermittent excitement, this site provides a lot to respond to. I feel that, as a starting point, Ketki should plant a forest in the square.

Takeover of an Amul Park in Ahmedabad

Couple of decades ago, AMUL and the Ahmedabad Municipal Corporation strategized a Public-Private-Partnership through which the former got to locate their small retail outlets of milk, ice cream and other dairy products near the entrances of local parks. In return, AMUL is responsible for the upkeep of the allocated parks. Mugdha’s site is one such park in the University area of Ahmedabad. As the name suggests, this is an institutional area and the side adjoins cross-roads with sparse traffic. The trapezoidal park, however, carries only traces of the intended infrastructure of a central lawn, a peripheral jogging/ walking track and vegetation. It is either rundown or never got completed. Perhaps it is the secluded and unattended character of the site which makes it a popular destination for the young populace frequenting the area.

Mugdha is most fascinated by the numerous trees on her site and their foliage. 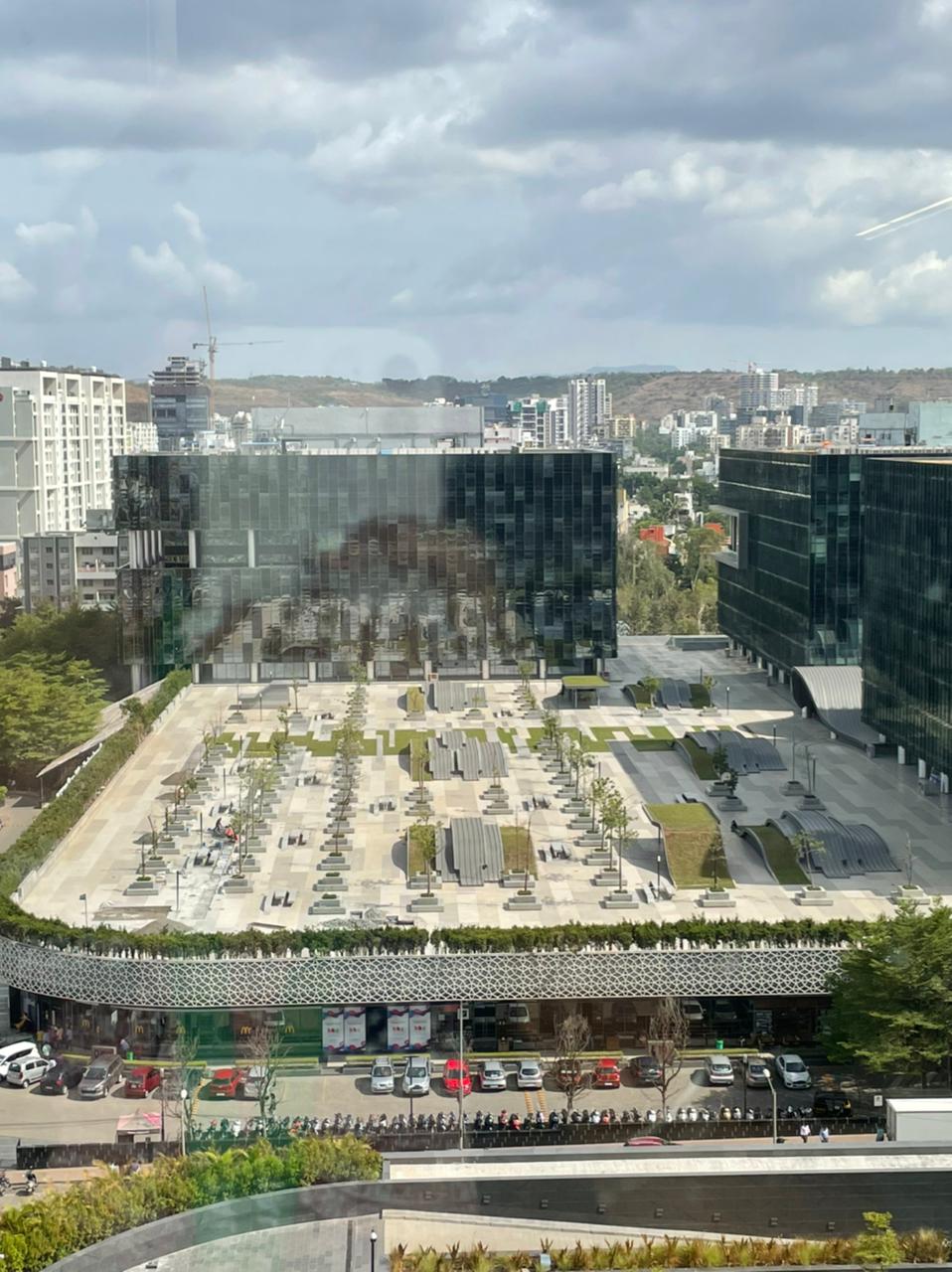 Charvi’s site selection was a chance discovery. She intended to intervene in a little green corner island segregating the main road from a commercial complex. While critiquing the inadequacy of the site in terms of its inaccessible location and rather small size, we noticed that the commercial complex has a very large terrace atop the podium of its two-storey shopping mall. While two adjoining edges of the terrace overlook the main roads & cross-roads, the other two sides have humongous ten-story office blocks. This terrace is landscaped with arrays of tree basins demarcating spaces orthogonally, contrived tetris-like lawns and several single storey structures of stair-rooms and sky-lights with wavy roofs. The geometries and symmetries of this manicured terrace park are clinically sterile. The barely animated environment presented itself as a wonderful opportunity for adaptive reuse into a place for performance. 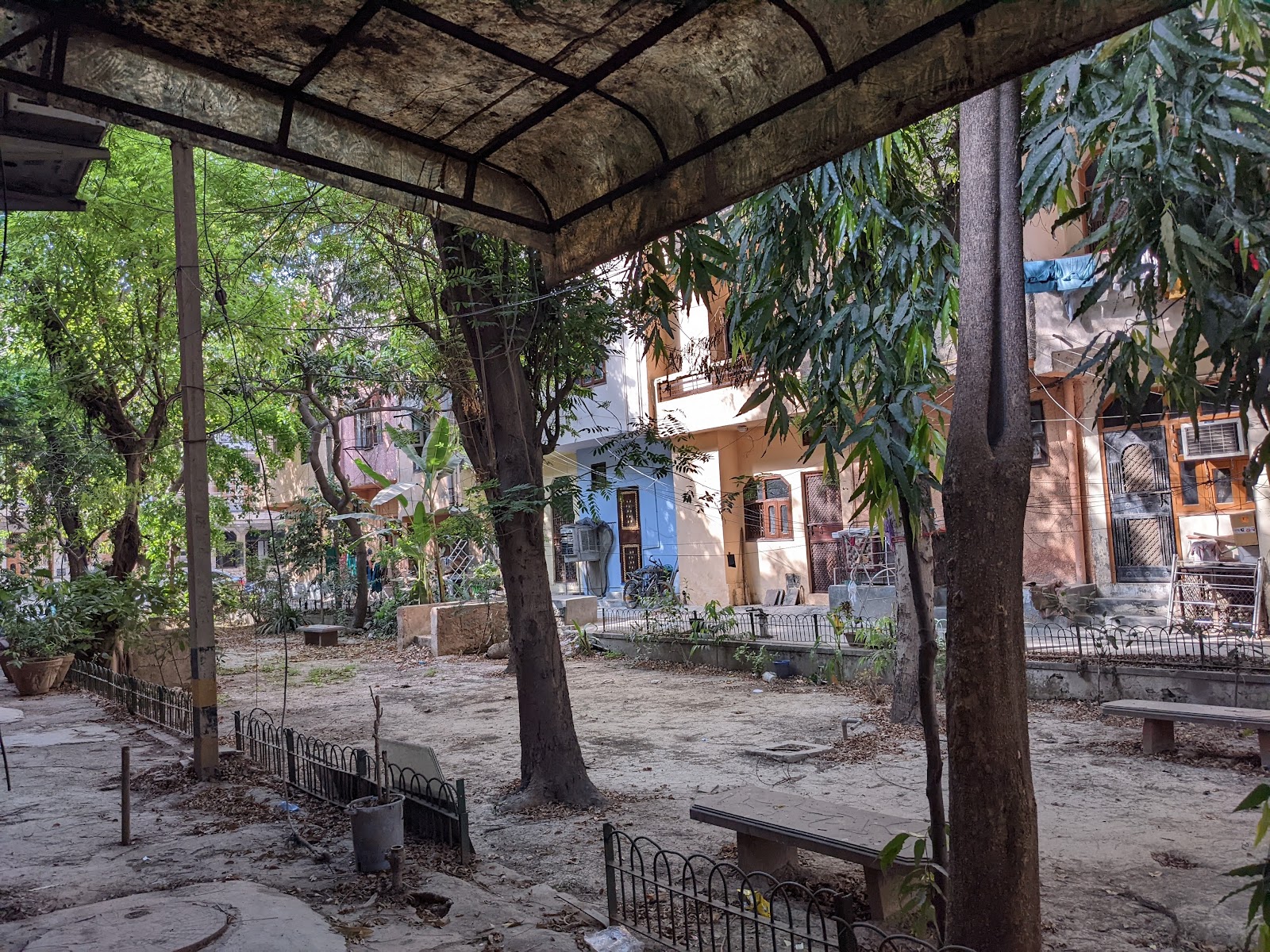 Prachi’s site is in her own backyard, quite literally. She lives in a society in Rohini, which is a typical housing development of Delhi with its single to four-storey shared-wall row-houses opening on the front and the rear. Two rows of houses with their backs turned to each other create a long (45M) and narrow (7.5M) park with several trees, generous canopy and a paved promenade on the two long sides, separating the rows of houses from the park.

The neglected park presented Prachi with the wonderful opportunity of creating an intimately scaled place of performance. She needs to start with appropriating the promenade and extending her site till the edges of the houses and also breaking the strong orthogonality of the periphery by borrowing from the fluid interaction of the green canopy above. 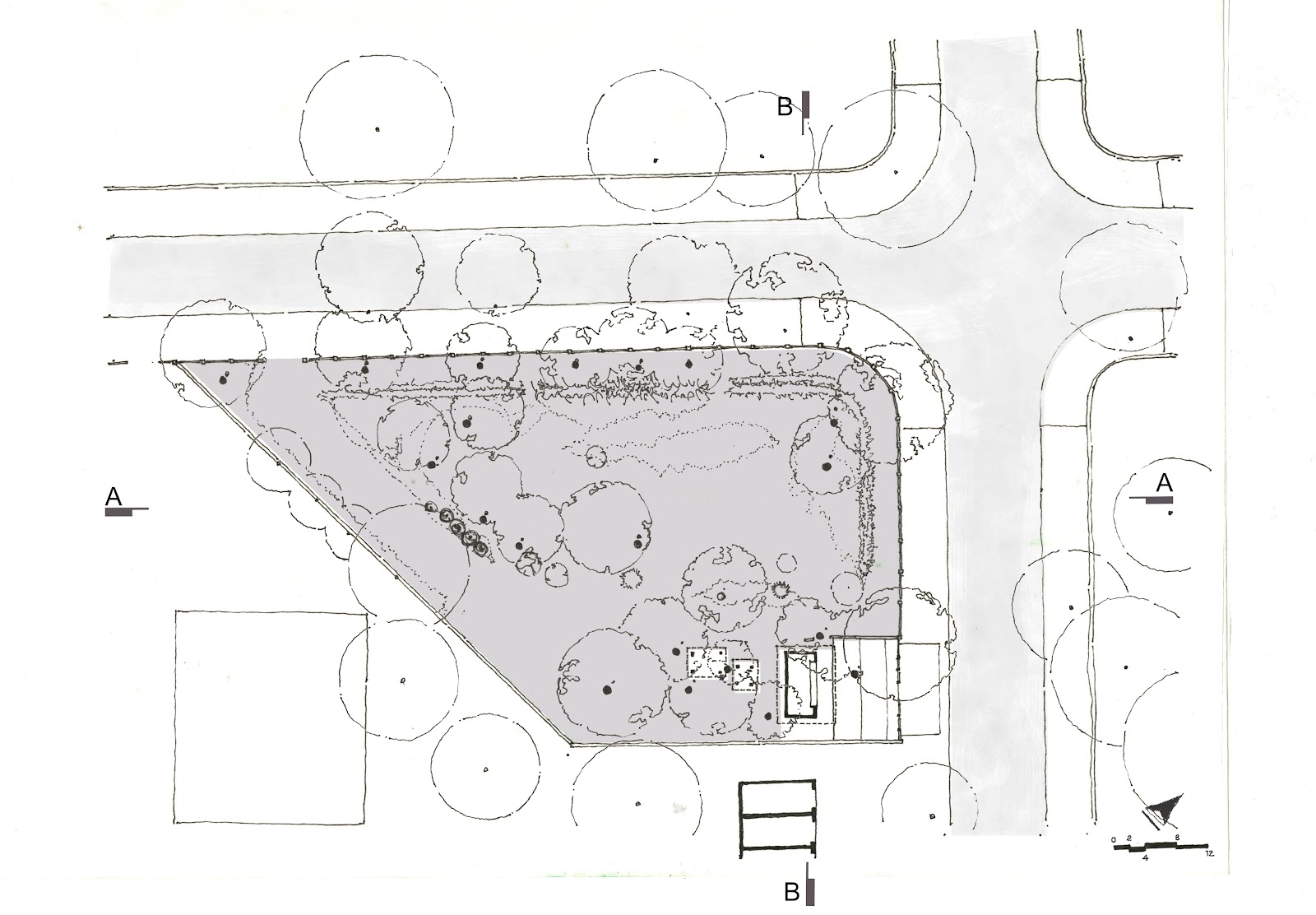 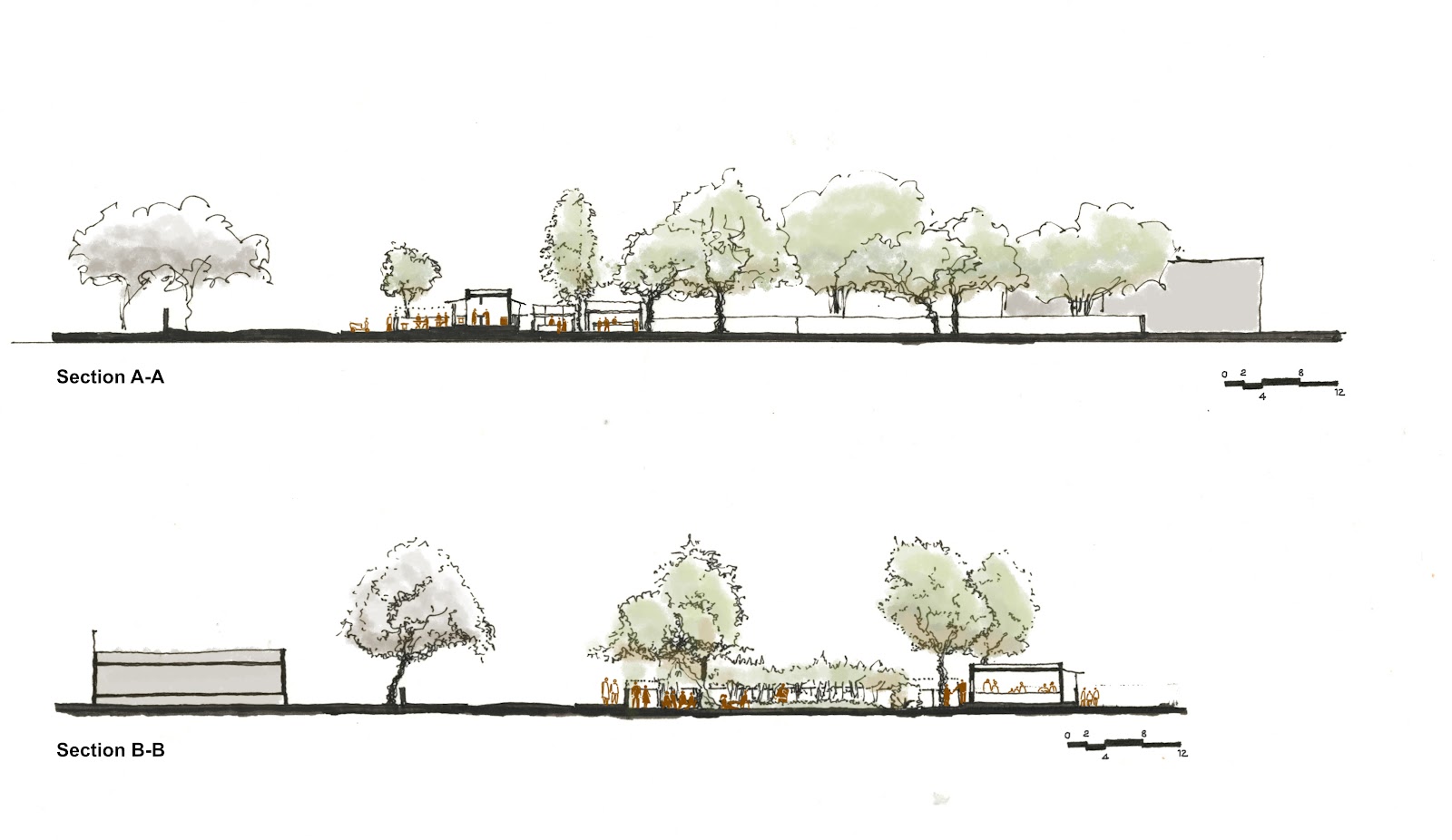 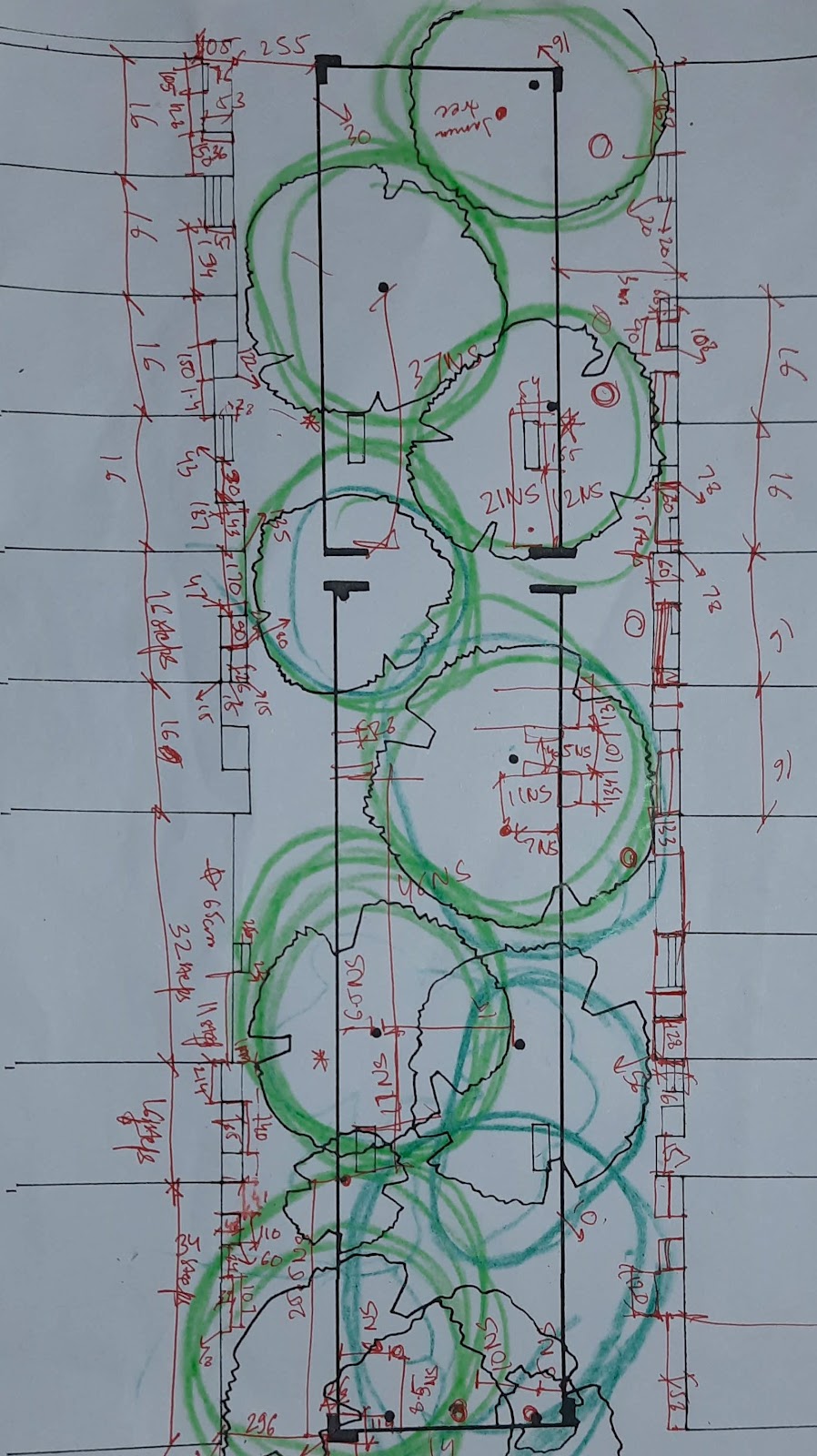 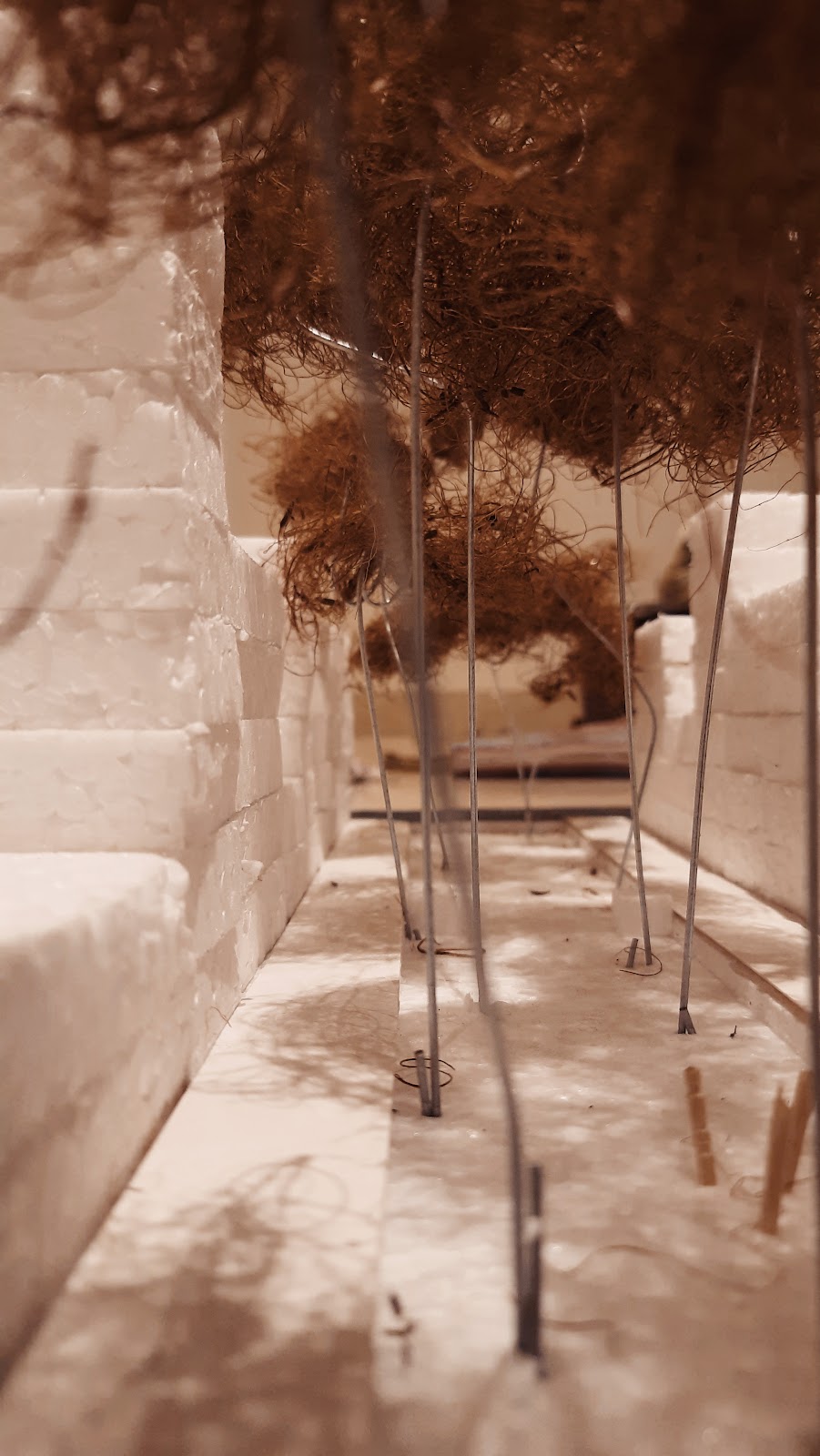 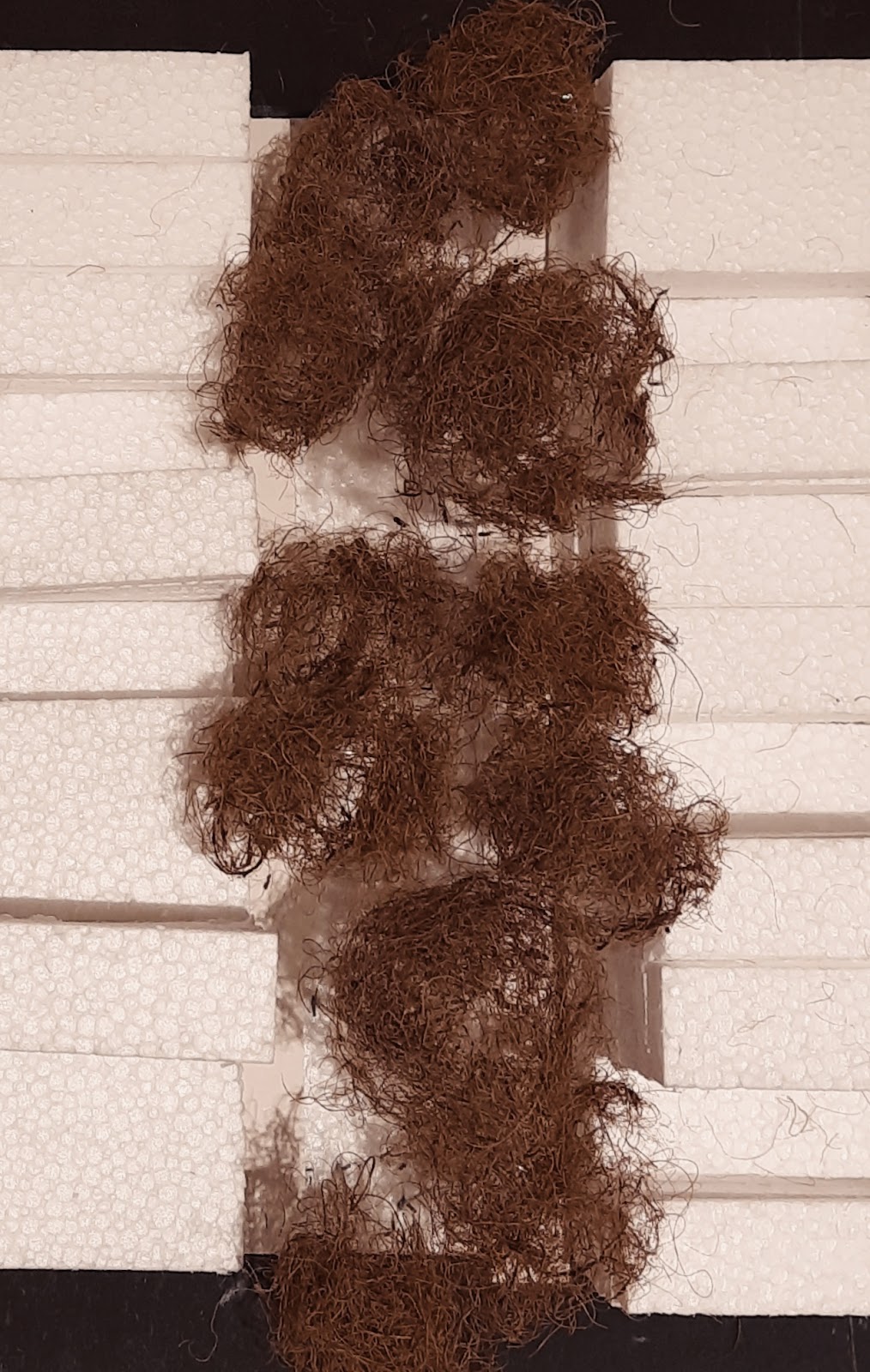 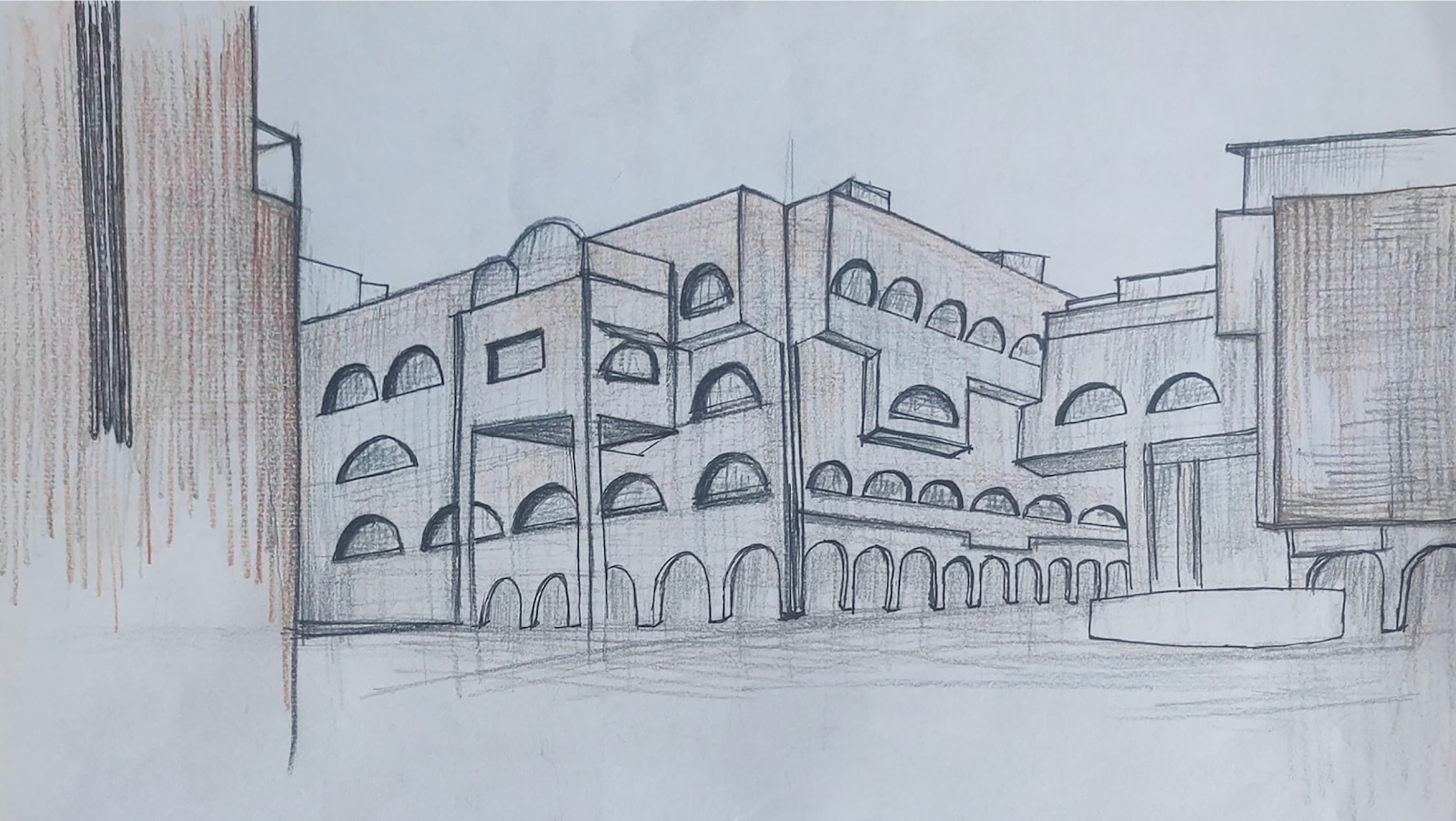 Although we didn’t have adequate time and resources to accurately measure-draw the sites, it is necessary that the proportions of the site and its constituent elements are recorded as authentically as possible. While the projects we design may be hypothetical, we need the context and counterpoints presented by a real site to challenge our imagination and help derive a robust design. The materials, form and articulation of the elements in one’s representation of the site need to be considered very carefully since this representation becomes the reality for our subconscious and influences our choices and decisions. For instance, using amorphous blocks of thermocol to show the foliage of trees may work when showing a vast expanse at a large scale, where it is to be perceived as mass. However, to express the porosity of the foliage at a smaller scale it becomes necessary to use coir or other material with strands interspersed with space. Similarly, a wall needs to be represented in considerable detail along with the horizontal segments and visually porous fencing that may adorn its top. If it is casually shown as a blank mass, not only does it misrepresent the experience one may have while standing in front of the wall, but it also becomes a daunting reality, if not an impossibility, to check the prospects of dematerializing the wall. Considering the need for a frugal approach to resources in evolving a ecological architecture for the place of performance, it is necessary that the untamed ground is represented as organic surface using techniques in graphic and texture that express the randomness of the bare and vegetated earth, instead of choosing convenience and showing it as a plain surface.