A significant and ambitious part of understanding the site and context of a design intervention is the mapping of one’s emotional association with various parts of the site. To carry out such a mapping we need to look beyond the transactional aspects of the site and design such as entrance, toilets, offices, cafe and so on. Ascribing only functions to the various areas and locations disregards the human dimension of inhabitation. I categorise inhabitation into the following kinds, which perhaps encompass all states of our being in a space:

The fourth state of being, of course, is transaction – our activities and engagements –  which is what normally gets paid attention to. These categories, however, are not watertight compartments – there is the intimacy of self-care in solitude, while one can remain solitary even in a congregation. Nevertheless, this filter of the states of inhabitation, I believe, brings the inhabitant – the person – into focus, rather than their profession or role as in the case of ascribing functions.

The participants were asked to first identify spaces within the site which are conducive to solitary inhabitation. What emerged as the essential condition for inhabiting a space in solitude is that one needs to occupy the edge – away from others’ line of sight – and not the centre. Moreover, a wall or a hedge or a tree as a protective element covering the back further helps in demarcating the seclusion.

The next state of inhabitation that the participants were asked to mark within the site was congregation. Again, what emerges is that, as a counterpoint to solitude, congregation happens in the centre – amidst the lines of sight. The only element essential is the ground, which should not be disturbed with undulation. Roof could help but is not necessary, provided that the weather is conducive. People’s bodies within the congregation seem to collectively create the vertical markers necessary for space-making.

A very interesting discussion ensued from Mugdha’s question, “Can a group be vulnerable?” I responded with the example of various communities’ rituals of mourning death. That we socially mark someone’s passing away with a congregation demonstrates our ability and practice of vulnerability even in a large group. Mugdha herself followed this with a recollection of an incident during her college when she and her batchmates tried to reconcile with an overwhelming sense of loss on a majority of them being failed by their faculty.

The final mapping was of spaces for intimacy, which revealed, contrary to presumptions, that it is different from the spaces of solitude. In Prachi’s mapping, spaces of intimacy were more adventurous and occupied almost all the edges of her park, including the spaces of solitude. In fact, she made a wonderful observation that people could share intimacy over fences and boundary walls and communicate across streets and alleys. Mugdha’s mapping of intimate spaces was also very generous. However, she distinguished that not all spaces of solitude are conducive for inhabitation in intimacy. Mugdha sought greater seclusion for spaces of intimacy compared to solitude. Ketki too was convinced of this and insisted that the least one required in order to create the opportunity of intimate sharing is a hedge or a wall protecting the back to keep someone from peering over the shoulders. Charvi presented a resolution to what appeared as a deadlock between the opposing perspectives on the degrees of seclusion demanded by spaces of intimacy and solitude. She mapped intimacy in both secluded spaces where the back could be covered, as well as on plinths that can allow people to be in close proximity regardless of whether they were secluded. Charvi’s mapping offers a more open interpretation of intimacy which accommodates both seclusion as well as a carefree attitude. Personally, I feel that to express my desire to be in solitude would require a great deal of effort and I’d rather find a secluded space to be in. On the other hand, the engrossed body language of those engaged intimately makes it easily evident to others of the private moment.

While we were discussing the need to seek spaces conducive to how we’re feeling, for instance dark and secluded spaces when feeling gloomy, Charvi presented another counterpoint that, “when I’m feeling sad I want to go to a brighter and more open space to make myself feel better.” This came as a welcome affirmation of space impacting a beneficial change in how an inhabitant feels. Of course, the converse is also true that indifferent or bad spaces can make us feel sick, quite literally. 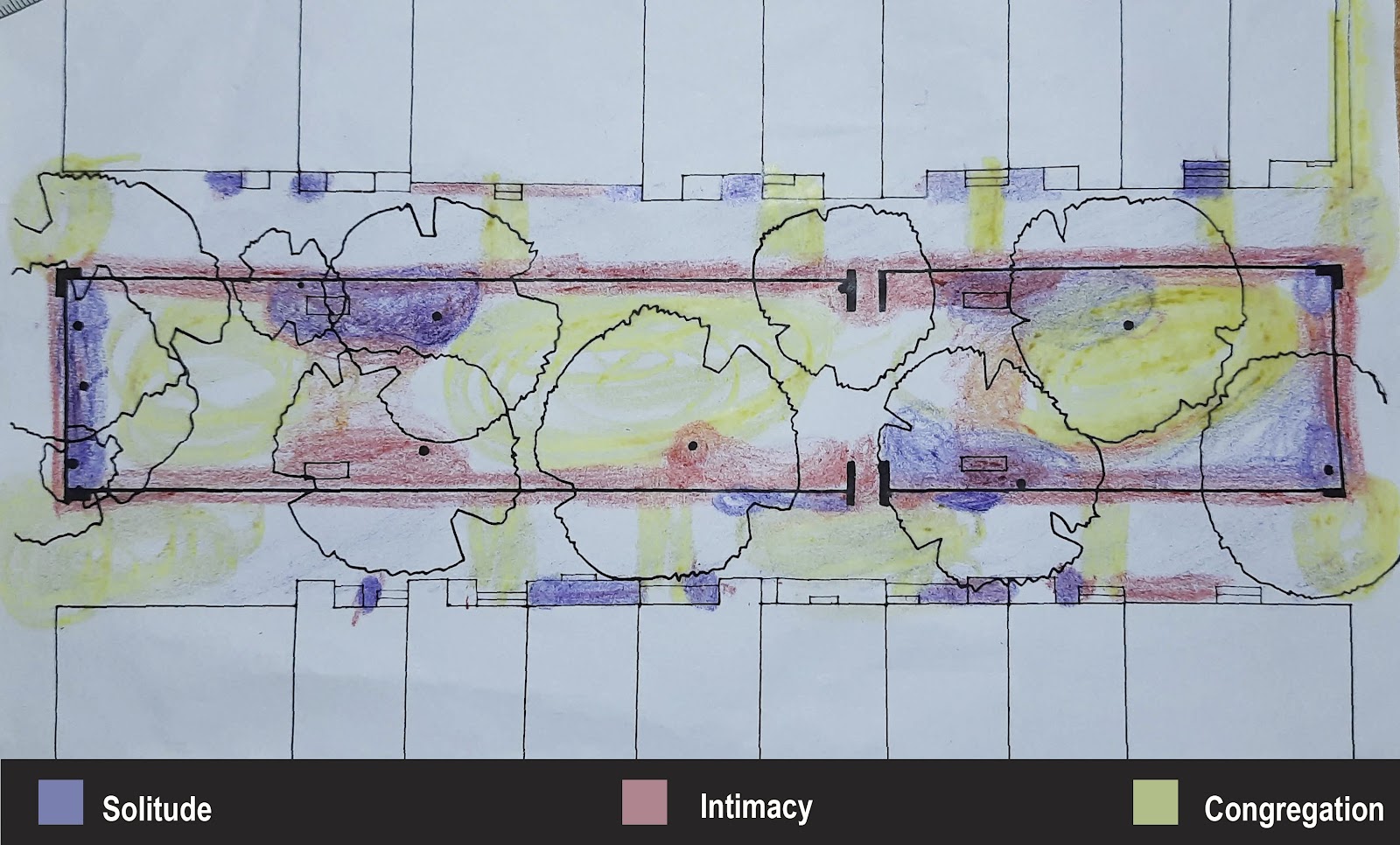 While Prachi mapped all three states of inhabitation within a single drawing, Ketki used three drawings to present the three states. Within each mapping, however, she employed a binary categorisation of intellectual and emotional engagement, which is representative of her struggle with the emotional content of this mapping. Mugdha’s mapping is very nuanced in both its graphic quality as well as content. Within each state of being she has identified varying degrees of openness of engagement with the surroundings (including people).

One of the most important realisations following such a mapping of inhabitation is that not only do we acknowledge all that already exists on the site, but it also creates the opportunity of appreciating the existing elements and conditions and accommodating them within the design. Such accommodation is essential to an ecological architecture.