Three publications were shared with the participants as context studies to locate themselves amidst questions of performance, places for performance and the pandemic.

Theatre and the CoronaVirus

Dr. Rustum Bharucha’s 9-episode speech act, published in January ‘21, is structured in three parts. The first part begins with an introduction – locating “the threat of the coronavirus within the confines of theatre spaces at structural and phenomenological levels”, followed by a comparison between the Elizabethan era plague and the Spanish flu which had contrasting responses to the pandemic in particular relation to theatre places, followed by a revisit to “one of the most incendiary essays on the performativity of disease—Antonin Artaud’s ‘The Theatre and the Plague’ (1933)…”

In the second part the focus is expanded to performances in daily life. In the three successive episodes, Dr. Barucha raises sociological, philosophical and political comparisons with respect to ‘social distancing’, “the benefits and tyranny of the lockdown” and the Black Lives Matter movement across USA  & the Shaheenbagh Movement in New Delhi.

The third part focuses on the “here and now of theatre artists” starting with a questioning of the definitions of ‘live’ and the ‘mediatized’, moving on to the need for an ecological architecture for theatre and finally culminating in personal learnings on living with ourselves and living with the virus through “the ethos of waiting.”

Conversations at The Vessel 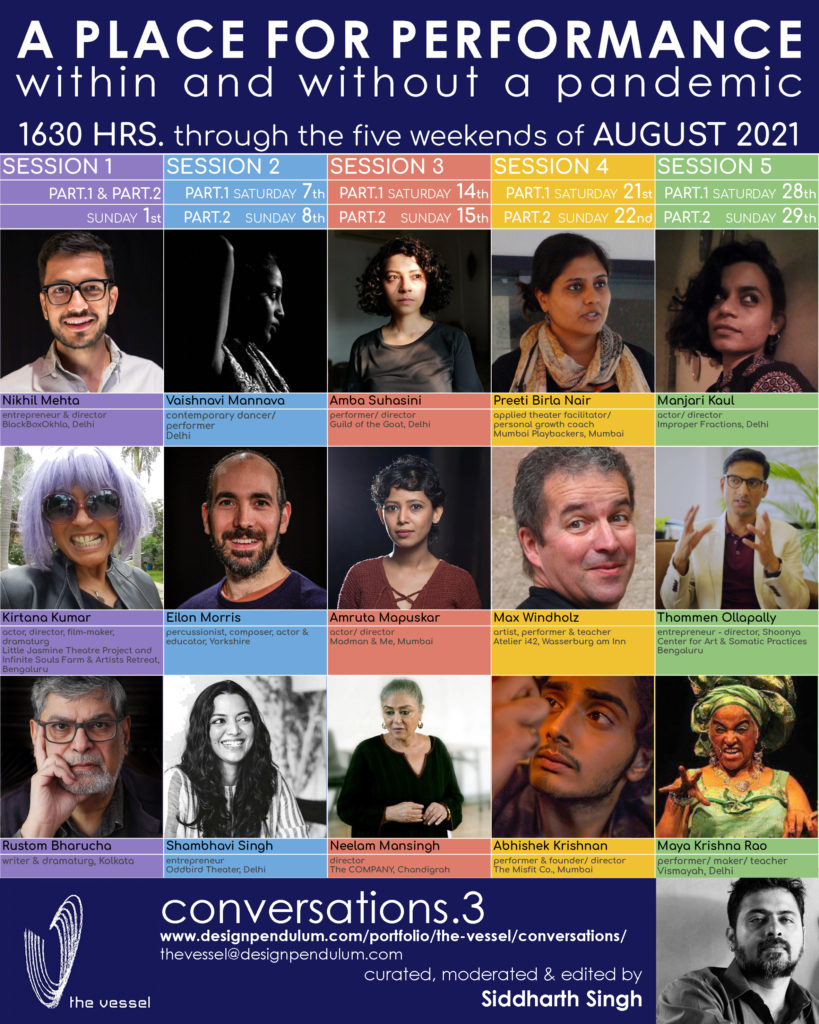 Initiated in August ‘19, The Vessel is a space for curated workshops with visual and performing artists. The pandemic hit after the very first season and after six frustrating months we initiated the Conversation series which were interviews conducted online and published as videos on http://www.designpendulum.com via YouTube. The first volume consists of six individual conversations with our mentors: three architects, a visual & performance artist, a singer & composer and a psychotherapist & growth coach – all renowned educators. We tried to make sense of what had hit us, where we were and where we’re heading.

The second volume was with the contemporary Sufi music band Chaar-Yaar, curated as a series of conversations with the band members in a build up to the launch of their album Singing Guru Nanak. Again, the pandemic had a conspicuous presence in the conversations, just as it was in the production of the music for the album.

The third volume, A Place for Performance, was curated as a precursor to this multidisciplinary design program. It comprises five sessions with three panellists each (theatre practitioners/ performing artists/ space managers/ dramaturges/ educators etc. from across the country as well as from Germany & UK) conversing around questions of the journey so far, the good and the ugly of the pandemic and the future prospects of performance places, practice and pedagogy.

This Anmol Vellani edited book published by IFA in 2008  carries interviews with and profiles on Astad Debu & Bansi Kaul along with essays from other practitioners of performance and theatre whose pursuit has been to create space outside the mainstream. Debu’s insistence on seeking challenge in a space and Kaul’s advice to love a space to be able to intervene in it are principles that even spatial designers should follow. Besides Kaul’s creative versatility, I am also moved by his frugal grassroots engagement, his condition of making friends before making an audience and his sensibility of measuring space through sound. This book is an invaluable resource for processes such as ours that intend to imagine “ecological architecture” for performance.

Of the three essential publications for reference introduced above, the participants were required to engage in group discussions on all of Dr. Bharucha’s nine episodes, five sessions of Conversations @ The Vessel Volume-3 and the sections on Astad Debu and Bansi Kaul from Beyond the proscenium. These sixteen chapters were equally distributed between the four participants and each had to moderate four of their selected references presenting the high points and raising questions on their reference for the session. On completion of the group discussion, participants were required to post reflections on each of the publications as a Context Summary on the program website.

This component of the program is an attempt at putting into practice three significant pedagogical principles:

I must, however, acknowledge the shortcomings in this component of the program. The moderated sessions haven’t been smooth with the participants struggling to coordinate time. In addition, context summaries have only been posted by the two younger participants and lack academic rigour of referencing and elaborating on the ideas presented. This is perhaps owing to their inadequate exposure to and experience in such processes. I hope the work increases and improves in the second phase as far as reflections are concerned.